Housing prices in Calgary likely to drop by tens of thousands over next two years, says CMHC

The Canada Mortgage and Housing Corporation (CMHC) says the average price of a house in Calgary could drop by tens of thousands of dollars over the next two years.

The CMHC’s latest Housing Market Outlook, which focuses exclusively on urban areas, says that the price is expected to drop to at least $399,800 by 2022, due to a combination of a sluggish economy and the effects of COVID-19.

“In the past few months, we’ve seen a significant shock to the economy and a shock to people’s incomes,” said Taylor Pardy, senior analyst of economics for the CMHC.

He said everything from a stall in migration to a near shutdown of the economy has impacted the housing market.

“That’s going to take a bit of a toll. We haven’t really had sort of those two factors come together in the past,” he said.

Slowing the pace of new construction

Pardy said the unprecedented measures taken to address the pandemic will be reflected in the slower pace of new construction over the next year.

Looking forward to 2021 and 2022, Pardy said the pace of new construction is anticipated to improve gradually as pandemic restrictions ease and economic activity improves.

“The other thing to remember is that with restrictions in place, typical sources of population growth in Calgary have been either significantly slowed or halted,” said Pardy.

“International migration as well as inter-provincial migration is likely not happening anywhere near the pace that it was pre-COVID.”

He said this will result in a significantly reduced rental demand at the same time a large number of rental units are anticipated to be completed and brought to market. Pardy said some existing units previously used as short-term rentals might be added to the supply of long-term rental units as well.

“The combined effect of a decline in demand and increase in supply could be a higher vacancy rate in Calgary over the next two years.” 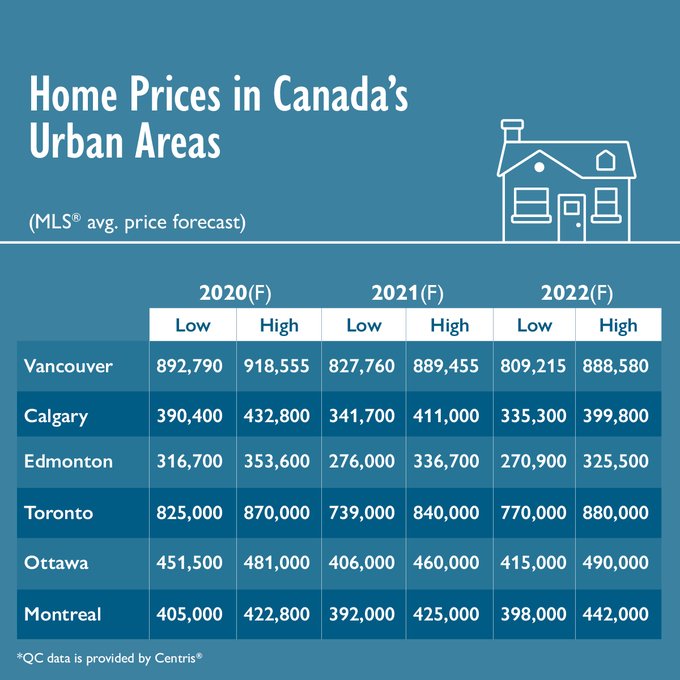 Pardy said Calgarians can expect resale activity to slow significantly this year, too, with a projected decline in sales between 12 and 27 per cent.

“In addition to a decline in MLS average prices of about 2.5 to 12 per cent,” he added.

According to Wong, local sales volumes in April dropped by about 60 per cent compared with last year.

“Which put pressure on prices a little bit, by about five per cent,” he said. “And what we noticed with everybody psychology-wise is that they were panicking adjusting to the times.”

Wong said things looked a little better in May, with sales volumes down only 40 per cent from last year.

“We’ve seen a little bit of a hold and wait, and now we’re starting to see a little bit more activity,” he said.

“But long term, I think you know the fourth quarter will really tell us where we’re headed, and I don’t disagree that prices could go down like CMHC is saying,” he said.

Impacts of subsidies and mortgage deferral

Wong said government subsidies and mortgage deferral programs are likely also playing a role, and are helping prevent distress sales from people who aren’t bringing in their usual income.

“My concern is, of course, once [that funding] runs out … when we don’t have the subsidies and all the deferrals are done,” he said. “That’s when you’re going to really start to see the pinch.”

Wong said people who continue to buy right now haven’t been impacted much financially by the pandemic.

“They’re nurses, policemen, firemen — public sector type folks who have stable jobs — they’re the ones who have been buying during this COVID period,” he said.

For homeowners who are thinking of selling right now, Wong said they should look to take advantage of the market when there has been an increase in volume.

“But people have to realize that they have to price it right,” he said.

“We’re in year six of a buyer’s market, and so people have to recognize that you’ve got to be in front of people to see them because if you get too many houses in that area, it’s not going to sell.”

For buyers, Wong said they could take advantage of  things like lowered lending requirements and lower than normal interest rates — currently down from nearly 3.5 per cent to some as low as 2.5 per cent.

“Buyers should take advantage of it to a degree because if interest rates start to go up or down, you can make up that differential. I think there’s good opportunities,” he said.

Pardy said lower interest rates would contribute to what people might be able to afford in the short run, but when you look at things like the unemployment rate, and the fact that roughly 15 per cent of mortgages are being deferred by the six big banks — it paints a less optimistic picture.

“There is certainly some financial stress on the system right now that needs to work itself out,” he said.

“I think it’s the upper-end stuff that [will see] some of the heavy losses,” he said.

But Pardy said that’s hard to know for sure.

He said areas of the economy that have been hit hardest include retail, transportation, education and industries related to tourism, as well as accommodation and food services.

“How this translates into, you know, other segments of the economy and potential job losses … is yet to come,” he said.

A hurting energy industry will also have an impact, according to Pardy.

“We haven’t really seen that too much in the job numbers yet but that’s likely to come as well,” he said.

“Given the uncertainty around the distribution of unemployment, as well as the distribution of who’s lost out on income and how that’s translated into lost household income makes it very, very difficult to predict what segments are going to fare better versus others.”

With files from the Calgary Eyeopener.

Lucie Edwardson is a reporter with CBC Calgary, currently focused on bringing you stories related to education in Alberta. In 2018 she headed a pop-up bureau in Lethbridge, Alta,. Her experience includes newspaper, online, TV and radio. Follow her on Twitter @LucieEdwardson